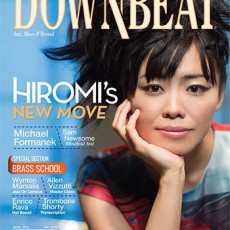 A short review of “Afro Groove” CD was published in an April issue of popular jazz magazine Downbeat. Two months earlier there was a review of “Mahalia” CD in this magazine.

“Performing to an audience in her native Poland, Magda suggests a familiarity with the blues that sometimes manifests itself in eccentric ways. Start with her strep-throated emulation of Charlie Patton and her Tuvan/Berber throat ululations. She’s also full of surprises in her choice of songs, ranging from Tracy Chapman, Eric Bibb and Mississippi Fred McDowell to Tinariwen. Though slowing the flow of the set with too much singing, guest Billy Gibson sure knows how to work his “Mississippi saxophone.” The crackerjack Polish band attains its best groove upon entering the Malian mystery domain of “Cler Achel.” Three bonus concert tracks get their own CD.”
Frank-John Hadley, “Downbeat” Magazine 2013/4